Noctilucent Clouds
Summer is a difficult time for astronomers. With so few hours of darkness, observations can be tricky and deep sky object imaging runs are restricted to the very short spell of true darkness. The brighter planets remain visible, along with the Moon, and there are some nice globular clusters and summer nebulae to be seen. Other observations are definitely hindered. So does this mean I spend less time outside at night with my camera and there feel less sleep deprived than usual?   No it doesn’t, because summer is noctilucent cloud season! 2018 was an amazing year for NLCs and I saw more displays that year than I have during any other year. I didn't see as many displays during the 2019 season and at the time of writing the 2020 season hasn't yet begun. But I'm keeping everything crossed for another good year for NLC hunting.

Noctilucent clouds (NLCs), also known as “night shining clouds” are still a bit of a mystery. They are sometimes described as the “ragged edge” of polar mesospheric clouds. They differ from other clouds mainly because of their altitude. Earth’s atmosphere is divided into different layers. Directly above the surface is the troposphere, which reaches up to around 10km. The clouds we see each day are all located in this region. Cumulus clouds, those big fluffy cotton ball clouds we all drew as children, are some of the lowest at around 2km above sea level. The highest clouds (with the exception of towering storm clouds) are those thin and wispy cirrus clouds responsible for solar haloes, sundogs, and other optical phenomenon, and they’re located at around 6km above sea level.  Just for comparison, airliners cruise at around 12km. So where do NLCs fit it? We need to go higher up for those; much higher up. Above the troposphere is the stratosphere, a layer which is unique to Earth. This is where the ozone layer is located, formed when UV from the Sun breaks down the oxygen in our atmosphere. The stratosphere reaches up to about 50km. Saturn’s moon Titan also has a stratosphere which is similar to Earth’s but is formed when methane is broken down by the Sun rather than oxygen. Apart from Titan and the Earth, nowhere else in our solar system has a troposphere. Above that we have the mesosphere, which extends to 85km, and above that is the thermosphere. It is at the boundary between the mesosphere and thermosphere that you will find NLCs. The bottom edge of aurora displays is only 15 km above this, so they really are very high! They are sometimes seen in the very tenuous atmosphere on Mars too, where they reach a whopping altitude of 100km. This makes them the highest clouds recorded on any planet in the solar system.  The graphic below gives you an idea of how they compare: 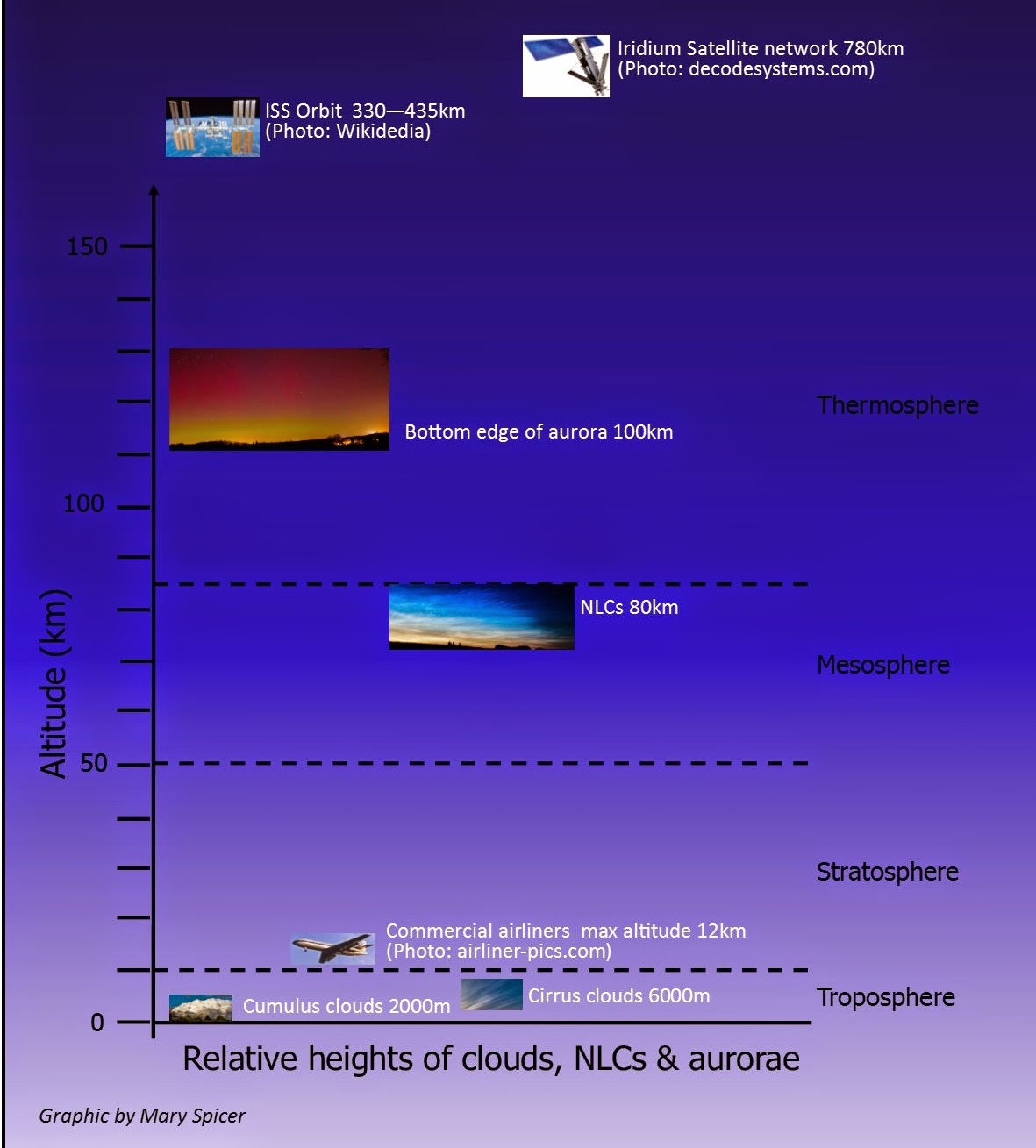 As the name suggests, NLCs are only visible during deep twilight so they can be seen around an hour or two after sunset in the north-western sky, or an hour or two before sunrise in the north-eastern sky (in the northern hemisphere). Sometimes they can stretch a huge distance across the northern horizon and I've seen displays where NLC were visible along over 100 degrees of northern horizon! They are high enough to remain under-lit by the Sun when it is between 6 and 16 degrees below the horizon, at a time when the lower levels of the atmosphere are in shadow. This gives them a beautiful ethereal quality as they appear to glow a bluish-white in the shaded sky. Near the solstice, at some latitudes NLCs may be visible all night long. We still don’t know a great deal about them, and there is fierce debate about how and why they form. What we do know is that they were first reported in 1885; prior to this there had been no reported sightings of them. We also know that they used to be quite rare, but are now becoming more frequent. They are only visible during summer months (between mid-May and mid-August in the northern hemisphere and mid-November to mid-February in the southern hemisphere) and are usually only visible from a latitude of between 50 to 60 degrees. They are not visible from the polar regions because during the summer months the Sun doesn’t get low enough for the lower levels of the atmosphere to be in shadow, so the sky is just too light to see NLCs from there. They are reported much more frequently in the northern hemisphere than in the southern hemisphere, but it is unclear whether this is due the southern latitudes being less well populated than the equivalent region in the north. What is clear is that displays in the southern hemisphere are usually much fainter than in the northern hemisphere, and during the 2014/2015 NLC season in those areas behaved differently than expected. 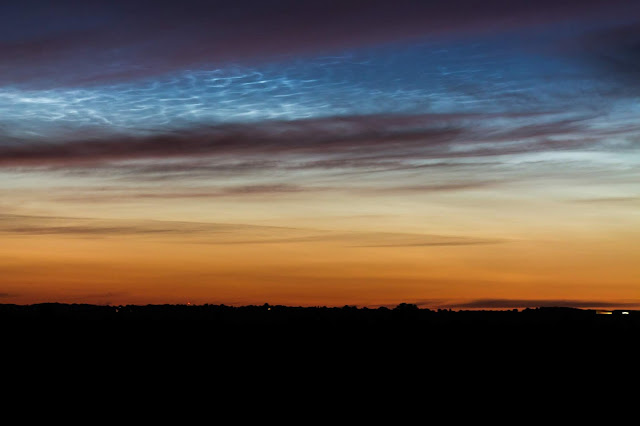 The air in the mesosphere is very thin and very dry. NLCs are made up of tiny crystals of water ice, with the average diameter of each crystal being only 100nm in size (0.0001mm) so that is why they aren't visible during daylight hours.. These crystals will only form if the air temperature is lower than -120oC.  The temperature of the mesosphere is actually colder in summer than it is in winter, so this is the only time the air is cold enough for NLCs to form. They are usually silvery blue in colour (although they have been reported to appear as red and green) and can take on a huge variety of structures and patterns. Sometimes they are little more than a white glow, other times they look like reflected ripples of water. Their brightness is affected by the solar cycle. When the Sun is at its most active, NLCs are usually less bright then when the Sun is quiet. It is thought that this is because when the Sun is more active there is an increase in how much UV light hits the atmosphere. In addition to breaking down oxygen, UV light will also break down water molecules. So if there is more UV breaking down water molecules in the mesosphere, there is less water available to form NLCs. 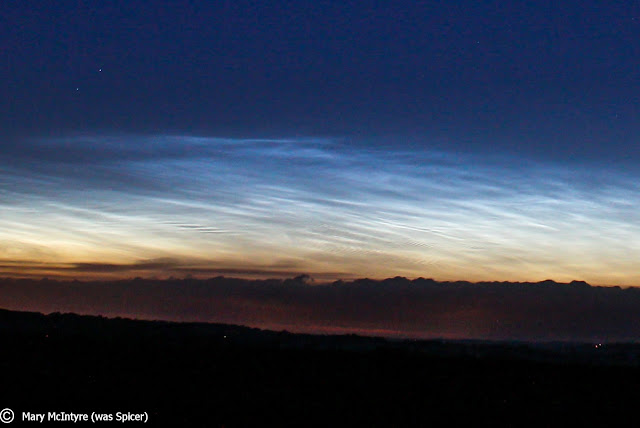 There are several theories about how NLCs form and why they are becoming more frequent. For many years it was thought that their frequency was connected to volcanic activity. The first time they were reported back in 1885 was just 2 years after a major eruption from Mount Krakatoa. However, many scientists today do not believe there is a connection between the two. A different theory links NLCs with dust from micrometeorites, with those tiny dust particles acting as a seed for the tiny ice crystals to form around it.  Another very interesting observation involved the space shuttle. The water vapour from exhaust fumes following a launch would rapidly move down from the thermosphere into the mesosphere and towards the polar regions and cause individual polar mesospheric clouds. But these were isolated displays and not thought to be connected to the main displays that are seen during the summer months.  There is, however, strong evidence connecting them to climate change.  Whilst an increase in greenhouse gases, such as methane and carbon dioxide, causes the lower levels of the atmosphere to heat up, it also causes the temperature of the mesosphere to fall, thereby making it more likely that those minute ice crystals will form and then go on to produce NLCs. This would explain why the frequency of NLC displays has increased in recent years. 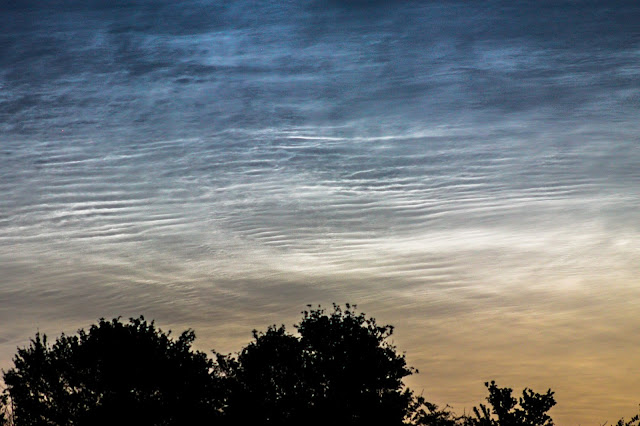 As NLCs form around the polar regions, it produces a characteristic pattern which is known as the NLC daisy because it has multiple arms, or petals, which point downwards, away from the pole. If you visit www.spaceweather.com you can view the current NLC daisy and if one of those petals is reaching down towards the UK, then you have a good chance of spotting them.  You can also keep an eye on the NLC webcam network which has webcams located in various places on the northern coast of mainland Europe. These are extremely useful because their sunrise and sunset times are an hour ahead of us, so you can look at the webcams to see if there is a display likely to be visible that evening/morning. The link for those webcams is here: European NLC webcams
If you see evidence of NLC on the webcams, then get to a location which has a good, unobscured view of the northern horizon and you will be in for a treat.

NLCs are the reason why I will still be ducking in and out after sunset and probably having a few early starts too, in my annual quest to capture these beauties on camera. Anyone who know me know that I detest early starts, but I believe these gorgeous clouds are worth getting up at 2am for!

My entire NLC photo/video collection can be viewed on Flickr here: https://www.flickr.com/gp/spicey_spiney/mSs1op 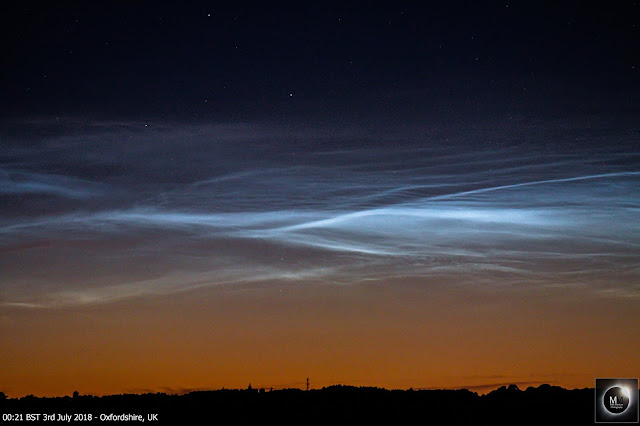 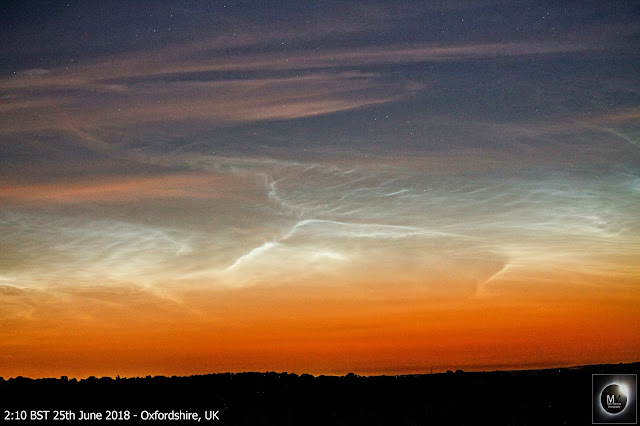 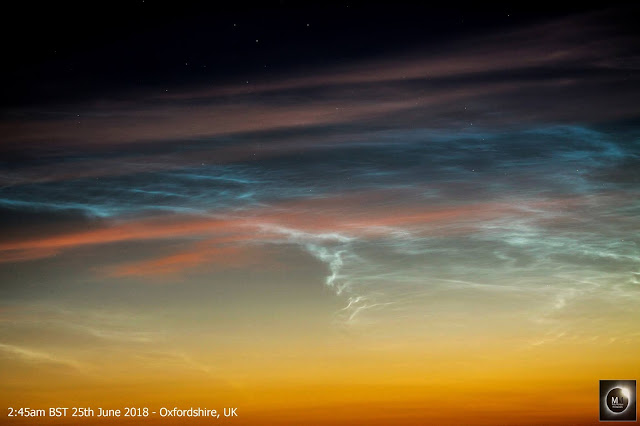 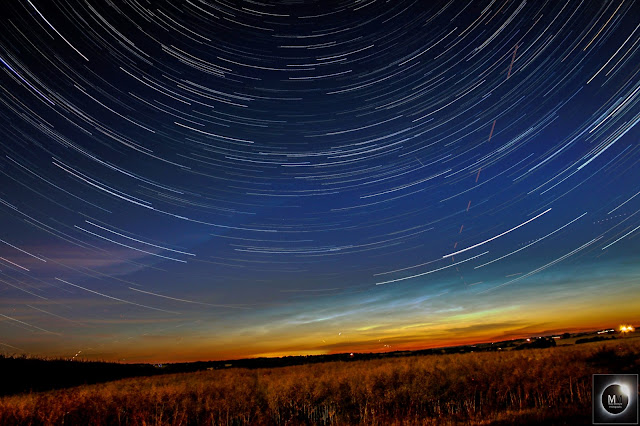 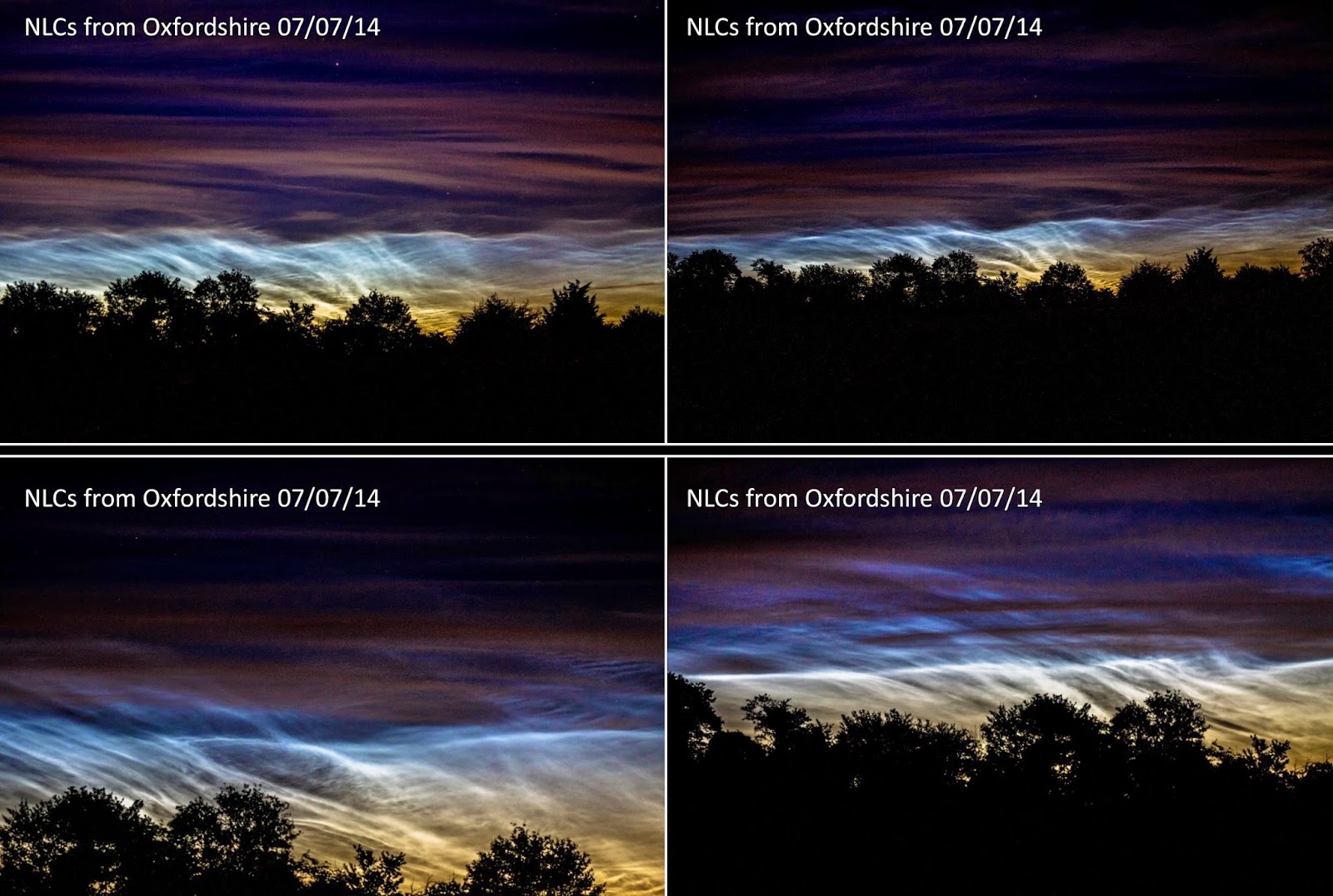 Mary McIntyre is an amateur astronomer and astrophotographer based in Oxfordshire, UK