Confessions of a Perseid Hunter


Confessions of a Perseid Hunter

All of my life, I’ve had dreadful weather on or around the peak of the principal meteor showers.  When I lived in London I rarely bothered because the light pollution made it very difficult to see much, but when I moved back to Lancashire in 2001 I was looking forward to having darker skies again.  For 12 years I religiously camped out in the garden late at night during the week leading up to the peak of all the main showers.  The most meteors I ever saw on those nights was 2 or 3 over a 2 hour period. However, on the nights immediately before and after the predicted peak I was always treated to cloudy skies and was so utterly disappointed each time.  I recently moved to rural Oxfordshire and the skies here are a huge and dark.  Once again I allowed myself to become excited in the run up to this year’s Perseid meteor shower, because from such a dark location I would surely see more than 3 meteors!  Over the weekend of 9th/10th August, we sat out until quite late but didn’t see very much.

Sure enough, on the night of 11th August it was cloudy again.  I was beginning to think I was destined never to witness a meteor shower peak.  But the predicted rates were still good for the night of the 12th, so I kept everything crossed for a clear night!  The weather during the day was awful, and things were not looking good.  Then at around 6pm the sky started to clear. I was becoming so superstitious. Don’t even say out loud that the sky has cleared; don’t print out any observing sheets; don’t get the camera ready; don’t even look directly at the sky in case it makes it cloud over!  As darkness fell, the clouds stayed away and I began to believe that I might actually be in luck.

At 10pm I dressed myself in 4 layers of clothes, dug out my scarf and gloves, grabbed a blanket (I’m prone to feeling the cold!), got my camera focused, notepad at the ready and my chair in position.  By 10:30pm my eyes were dark adapted and I was ready to go.  Now there is a wealth of information on the internet about the origins of The Perseids, together with observing tips, but there was surprisingly little practical advice about photographing a meteor shower. We both had our cameras set to continuously take 30 second exposures and we tried to make sure we were pointing at different parts of the sky.  We knew that we should be pointing the camera at least 45 degrees away from the radiant and at about 45 degrees up. We knew that the later it got the higher the rates were likely to be, partly because the radiant was getting higher, but more importantly because after midnight our side of the Earth would be facing the debris cloud head-on, and effectively “scooping up” more dust particles.  Aside from that, it really was just a case of trial and error.

From an observational point of view, nothing prepared me for just how amazing a night I was in for! I was out for 5 hours in total, keeping a tally of what I’d seen each hour.  In addition to keeping a tally of number of meteors observed, I wanted to try and distinguish between those which were definitely Perseids and those which were either sporadics, or possibly Kappa-Cygni meteors as this minor shower overlaps with The Perseids.  Over that period I saw 156 meteors! 148 of those were Perseids, 5 of which were fireballs.  I was beside myself with excitement!  At about 2:40am there was a really bright Iridium Flare so I was distracted for 10 minutes or so while I set the camera up for that, but during a test shot I had a really bright Perseid streak through my field of view! By 3:30am the cold finally got to me and I had to come back inside. I drew up a summary table of what I’d observed.

For about 3 hours of this session there were 2 of us observing, so that gave us a greater chance of spotting more meteors. Had there been 2 of us for the final couple of hours, I’m sure that the rates would have been even higher!

Once I’d collated my numbers, I couldn’t resist a quick look through my photos before going to bed - all 400 of them! I knew I’d caught at least one bright meteor whilst getting ready for my Iridium flare, but at first glance it looked like I may have captured about 4 more too. But I was too tired to look at them all properly, so finally I went to bed around 5am.

After a few hours sleep I looked more carefully at the photos. At times I wasn’t sure whether what I was seeing was a meteor streak or a satellite. Having the camera set on continuous was a real advantage here, because it helped to identify anything that was a satellite or aircraft, as they would appear in previous and subsequent shots, therefore ruling out a meteor.  It turned out that I had a lot of photographs of satellites! However, all together I believe I caught 16 meteors on camera. For a first time observation, I was utterly thrilled with that number! 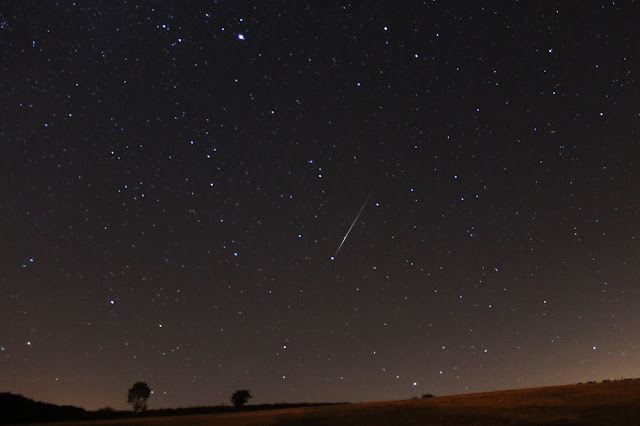 So what did I learn from this experience, and what will I do differently next time?  In no way do I profess to be an expert meteor spotter after only one meteor shower under my belt. But I did learn a few things which I think it may helpful to share (and I’m very happy to be corrected if you think any of this is wrong).

I’m already looking forward to some more observing during the rest of the meteor showers this year. The Moon phase isn’t favourable for the main ones, but if it is clear, I’ll certainly be outside again, with my blanket and a flask of hot chocolate!

What Are Iridium Flares?


What are Iridium Flares?

Recently I’ve become obsessed with observing and photographing Iridium flares.  A lot of people have asked me what they are. I knew the basics, but this question led me to find out more about them.
Basically, an Iridium flare is when the sun catches the reflective panel on an Iridium satellite, and this causes it to glint in the sky.  The flare can last anywhere from 5 to 20 seconds and may as bright as magnitude -8; that is 30 times brighter than Venus! Each satellite has 3 reflective panels, each called a main mission antenna, which are arranged in a kind of triangular structure and angled at 40o. Each panel measures just 188cm x 86cm x 4cm but they are highly reflective aluminium plates which have been treated with silver coated Teflon.

Structure of an Iridium Satellite: 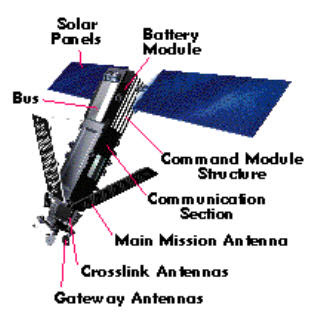 When in orbit, the satellites are in a vertical position. When one of the main mission antennae catches the Sun, it produces a bright but small reflection which projects onto the surface of the Earth. This reflection is only 10s of kilometres in size, so this means that Iridium Flares are very location specific.

So what are these Iridium satellites? They are a network of 66 active satellites which are used for worldwide voice and data communication from satellite phones.  This means the network of satellites needs to provide full global coverage, so their orbits cover all parts of the Earth. This is called the Iridium Satellite Constellation” (ISC).  The ISC launched in 1998 with financial backing from Motorola.  Unfortunately they went bankrupt 9 months later, partly due to the huge costs involved with getting all 66 satellites functional before the satellite phone network could properly function.  Another factor was that the handsets were very bulky and would only work outside, therefore the popularity of mobile telephones overtook satellite phones.  At one point it was looking like the satellites would have to be de-orbited. Fortunately, the scheme was restarted in 2001 by Iridium Satellite LCC, who later merged with GHQ in 2009 to form Iridium Communications Ltd.  The system was largely used by the US Department of Defence.

The Iridium Satellite Constellation was originally planned to consist of 77 satellites, the atomic number of Iridium. However, it actually consists of 66 satellites, in 6 polar low-Earth orbital planes.  All satellite calls are routed via space. As well as communicating with the hand-held devices, each satellite is in communication with up to 4 adjacent satellites. This effectively forms a mesh network.  In addition there are 4 Earth base stations, which are in communication with any satellites within range.  They can only communicate if there is clear sky between the device and the satellite, therefore they don’t work well indoors or in areas of dense forest.

Iridium are currently developing a second generation network, called Iridium NEXT. This will consist of 66 new satellites plus 6 spare in orbit and 9 spare on the ground. These are due to launch in 2015 via Space X Falcon 9 launchers.  Each satellite will also contain cameras and additional sensors.  The current ISC will remain in service until the NEXT network is fully functional, estimated to be during the 2020s.

There are currently over 8,000 satellites in orbit, around 3,000 of which are defunct.  With such high numbers in orbit it’s hardly surprising that on 10th February, 2009 there was a collision between Iridium 33 and Kosmos 2251. They collided at a speed of over 26,000 miles per hour!

So how can you observe an Iridium Flare? There are many flare prediction programs available, either online or in the form of smart phone apps. I use either www.heavensabove.com or the SatTrack app.  As they are so location specific, it is necessary to first input your exact latitude and longitude.  Then you will see a list of upcoming flares, along with their predicted magnitude and exact location in the sky.  If you are very lucky, you may get multiple satellites glinting at once, producing a double or even a triple flare.  There are some Iridium satellites which are out of commission and which are tumbling; flares from these cannot be predicted. The angle of the flare is dependant on the orbit of that particular satellite. If you want to photograph an Iridium Flare, you need to be organised. First of all, I manually focus my camera on a bright star or planet. Then using a remote shutter cable I start the exposure between 10 - 30 seconds before the peak of the flare (depending on the magnitude) and continue to expose for the same length of time after the peak. This will give you a really nice, symmetrical flare on your photo.  The result will depend on how dark the sky is at the time of the flare and will be affected by moonlight, etc. It took me quite a few attempts before getting decent results but it was worth persevering!

Some Iridium Flare Photos by Mary 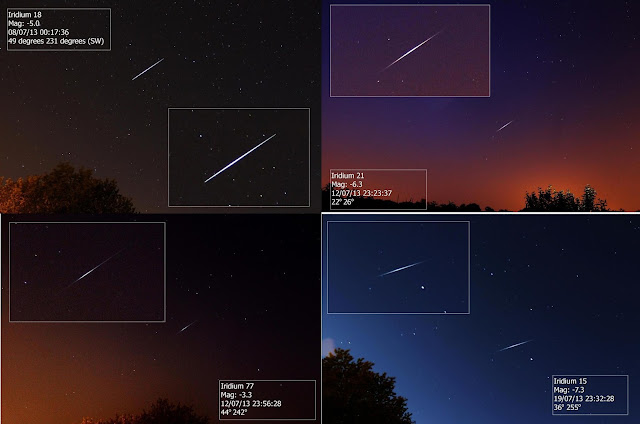 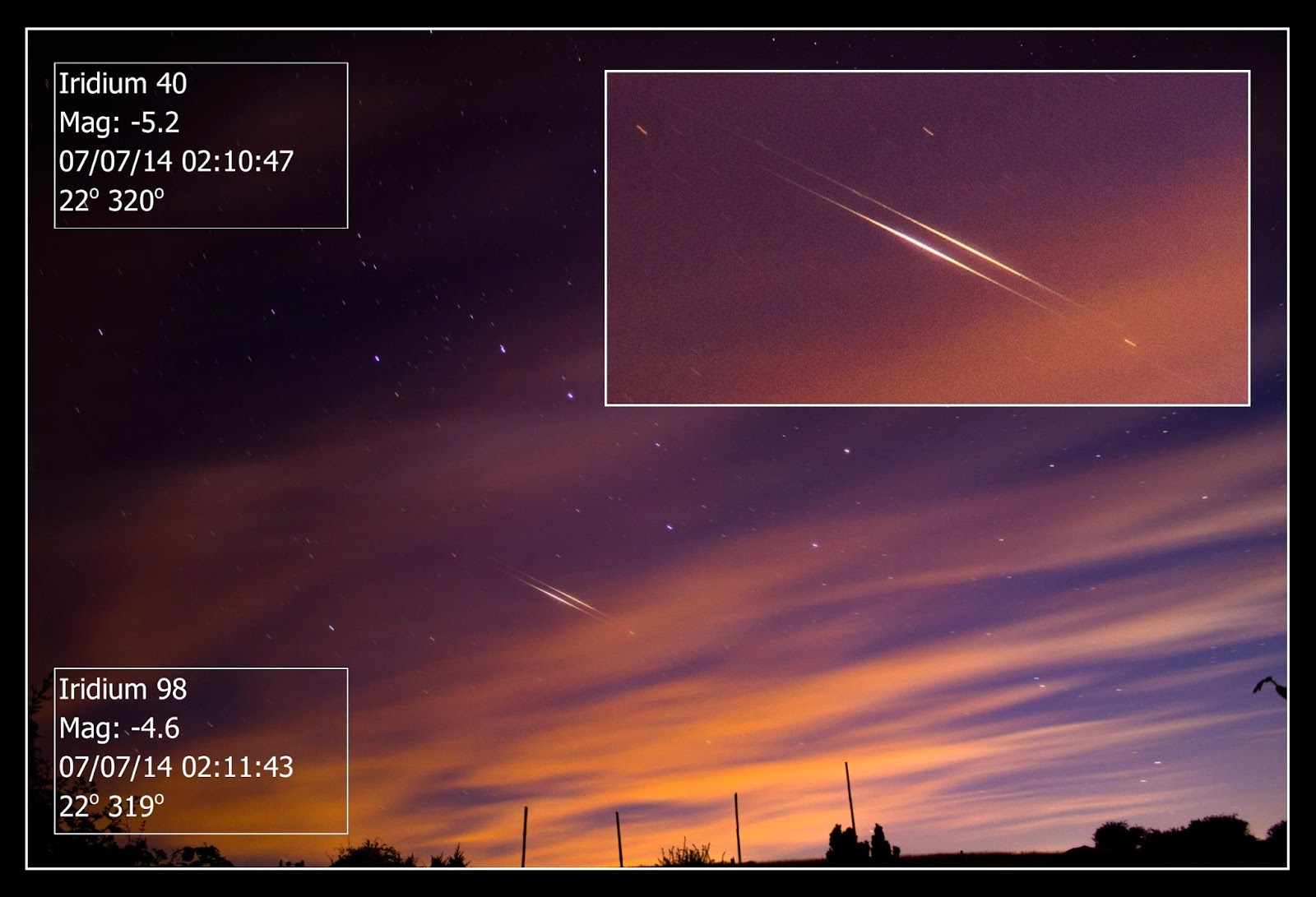 Posted by Mary McIntyre at 05:22 No comments: