How Super is a "Supermoon"?


How Super is a “Supermoon”? 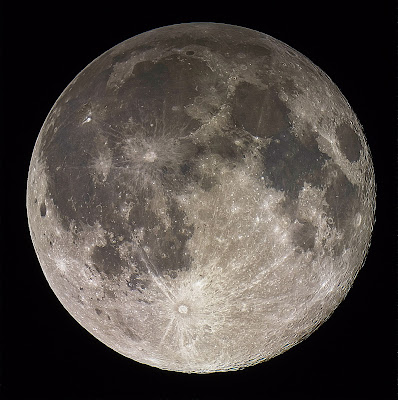 Our Moon orbits Earth every 27 days, but that orbit isn’t exactly circular; it orbits in a slightly elliptical shape.  So this means that once every 27 days, the Moon is further away than usual and once every 27 days it is closer than usual.  This means that the exact distance between us and Moon can vary by as much as approximately 43,500km. This sounds a lot, but when you consider that the average distance to the Moon is approximately 384,400km, 43,500km suddenly doesn’t seem like such a big difference. For information about the distance to the Moon, take a look at this great Universe Today article: http://www.universetoday.com/103206/what-is-the-distance-to-the-moon/


The correct name for the point when the Moon is at its closest to Earth is perigee and the when it at its furthest away, it is called apogee. The exact point of perigee or apogee can occur at different times in the lunar cycle. Approximate once a year we have a month or two when we get a Full Moon on the night of perigee, and the correct name for this is a "Perigee-Syzygy Moon". In recent years it has become known as a "supermoon" and these events are given a lot of press coverage. If we get a Full Moon on the night of apogee, then it sometimes called a micromoon (although the press don’t often make a big deal about that one!). The term “supermoon” is one that I personally try to avoid using because it was coined by the astrology community, and has no basis in astronomy! But if the press running stories about a supermoon makes more people go out and observe, then that's a good thing.

So what does it mean for us when we have a “supermoon”? If you believe the hype in the press, you will expecting great things, and the stories are often accompanied by very misleading images. Yes, the Moon is bigger and brighter, but will that difference really be that noticeable to a naked eye observer?  The perigee Moon is approximately 14% bigger than an apogee Moon, and around 30% brighter. Again, this does sound like an impressive difference. But if you actually look at the relative size of the Moon compared to the rest of the sky, you see that the Moon itself is actually quite a lot smaller than you probably realise; it is after all 384,400 km away.

Astronomers divide the sky up into degrees as a way of measuring apparent distances between objects. If you look at the horizon and turn around in a full circle, you will have moved through 360 degrees of sky.  The Full Moon only covers 0.5 degrees of that sky, so relative to the background, the Moon is actually really small. You can see from the wide field photo below that I took of the Moon rising, that the Moon itself looks tiny compared to the rest of the sky; yes, that tiny white dot is the Moon.  Looking at this picture, would you honestly be able to notice a 14% difference in size of the Moon? If you can, then you’ll have better eye sight than me! The actual size difference is shown in the image below this panoramic shot. You may notice a difference if you are using a telescope, but it is extremely unlikely that you will notice it naked eye.


We are bombarded by amazing photos of the Moon taken with telescopes or long camera lenses, so we begin to get a slightly warped perspective about the actual size of the Moon.  But that isn’t the whole story.  I get annoyed by press articles which give reader unrealistic expectations of an astronomical event.  Yes, it’s great to get people to go out and look for things, but I hate the idea that they will go out and be disappointed. But one really great thing that happens when people hear about a supermoon is that they go outside and look for the Moon rising.  A Full Moon rises in the east as the Sun sets in the west, so it is really easy to spot it. Every time we’ve been told about a supermoon, I have had people tell me they went out to watch moonrise and thought the Moon looked huge as it was rising. Yes it probably did, but that isn’t because it’s a supermoon.  It is actually due to something called the “Moon Illusion”.


It is a commonly held misconception that the Moon is larger as it rises and it gets smaller as it climbs higher in the sky. In fact, it stays exactly the same size, no matter where it is in the sky. If you want to test this, take a small coin outside with you at moonrise, hold it out at arm’s length and measure the relative size of the coin against the Moon. Then repeat this a few hours later, and you will see that the Moon size hasn’t changed. So why does it look so big when it’s rising? The exact reason for this has been fiercely debated for many years.

The times that the Moon looks the largest during moonrise, is when there is another object nearby to give it scale. For example, look at the two photos below which I’ve taken of the Moon rising behind distant trees.  Let’s imagine that the trees are 300 metres away. We all know how big a tree is when we stand underneath one.  A tree in the distance looks smaller, but our brains trick us because we know how big they are up close. So when you have the Moon rising behind the tree, it gives the impression that if we were to be standing close to the tree, the Moon would still keep its relative size.  But given that the Moon is about 384,400km, walking 300 metres closer isn’t going to make much difference!  The same principle applies if you see the Moon rising behind distant buildings. 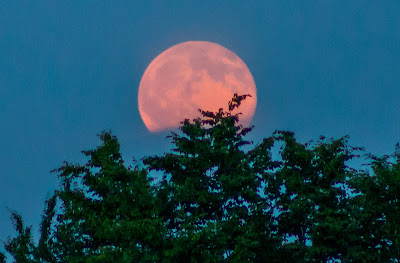 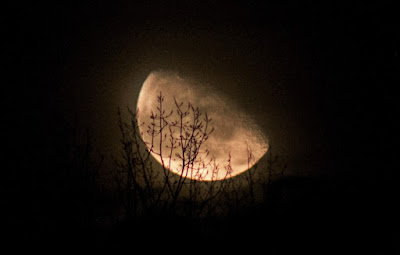 Once again, photos add to the whole illusion. There are an incredibly large number of fake moonrise photos on the internet.  It is very easy to create lovely pieces of digital art with image editing software, by dropping a nice close up photo of the Moon into the background of another photo. Some of them look realistic but others are so out of scale that they look ridiculous. However, there are also some gorgeous, genuine moonrise photos. One of my favourites was the subject of Astronomy Picture of The Day on 10th March 2012. It shows the Moon rising behind the Lick Observatory in California on 7th March. ( https://apod.nasa.gov/apod/ap120310.html ) 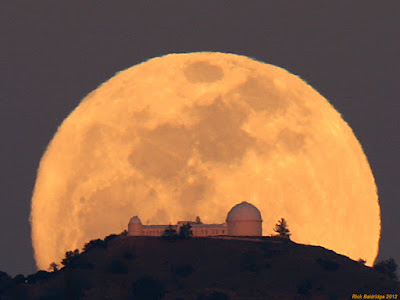 This photo makes the Moon look absolutely huge! It was shot with a very long lens from a huge distance and this creates a really stunning effect which is the same as the Moon Illusion.  However, the Moon Illusion isn’t something that is restricted to a perigee moonrise. Every day that you see the Moon rising or setting, if you have a distant object for perspective, then it will look larger than it does when it is higher in the sky.

As I said earlier, anything that makes people go out and observe an astronomy event is great, but I do get extremely frustrated with the radically exaggerated claims that many press articles make.  I really hope that every one of you reading this will go out and watch the next perigee Moon rising. But I also hope that you will do the same thing on many other nights and realise that the Moon is gorgeous and worth observing every night of the year, not just during a supermoon.

Dates of the next Perigee Full Moons: