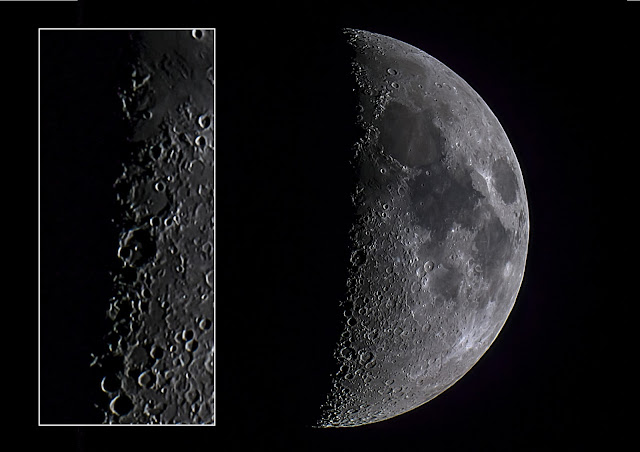 The X and V are usually visible a few hours before First Quarter phase, however, due to libration, the exact time of the X and V being visible is different from month to month.  I usually publish the times of the Lunar X and V on my monthly sky notes article, however, I hadn’t been able to find the times listed anywhere for 2017. Then on 4 January, I was made aware of the NASA Scientific Visualisation Studio Moon Phase and Libration 2017 tool. I used this to scroll through each month close to First Quarter Phase, hour by hour, until I could record the times of the X and V being visible.  The times I recorded are listed below.  These times are approximate because I just scrolled through hour by hour looking for the X and V to appear, so they are not exact. I recorded the time when the X first begins to appear, so it should be visible for an hour after the times below.  If you want to have a go a looking for a more accurate time yourself, then visit: https://svs.gsfc.nasa.gov/4537

Please note that although the X and V are visible every month, they may occur before the Moon has risen or after it has set from your location, so you will not see them every month from any one place. There are many apps out there which can show you your daily Moon rise and set times for your location. Please also note that the times given are in 24 clock and are in UT (the same as GMT) so you will need to correct for time zones and daylight time savings changes in the summer.