The Lunar X and V are transient lunar features which are visible on the lunar surface for about 4 hours, once a month. They are caused by sunlight illuminating the edge of craters. The “X” is caused by light illuminating the rims of craters Blanchinus, La Caille and Purback. The “V” is caused by light illuminating crater Ukert along with several smaller craters.  They are at their most striking when they are visible on the shadow side of the terminator, but they will remain visible against the lunar surface even after the terminator has moved because they are brighter than the surrounding area. 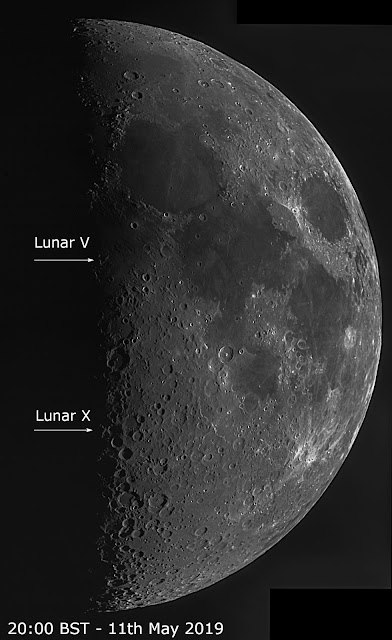 
The X and V are usually visible a few hours before First Quarter phase, however, due to libration, the exact time of the X and V being visible is different from month to month. I initially used the Lunar Terminator Visualisation Tool to get the approximate times of the X and V, then as I did in previous years, I used the NASA Scientific Visualisation Studio Moon Phase and Libration tool for 2020 (https://svs.gsfc.nasa.gov/4768) to check the start times. I did this by scrolling through hour by hour on the date of the X and V to ensure I had the most accurate times for the X and V becoming visible.  The times I recorded are listed below.  There is no fixed end time listed because as mentioned above, these features remain visible even after the terminator moves across them. But if you assume they are visible for around four hours from the start time, you will see them at their best. 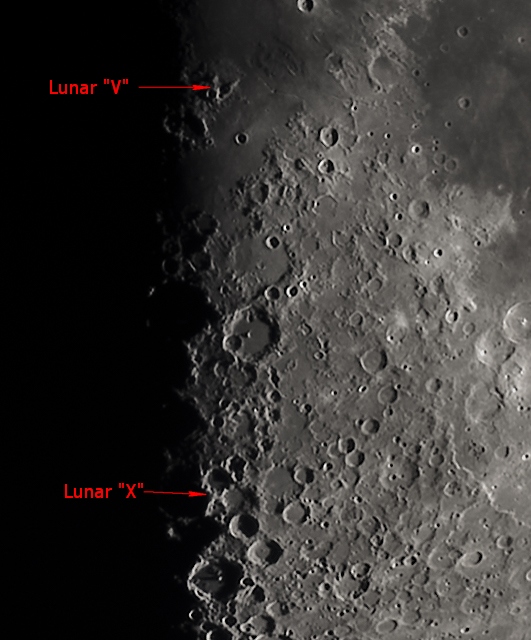 The Lunar X and V on the illuminated side of the terminator, 5th May 2017
By Mary McIntyre

Although the X and V occur every month, the time may be before the Moon has risen or after it has set from your location, so you will not see them every month. They may also be visible during daylight, and they are more difficult to observe and photograph on a daytime Moon.  Please also note that the times given are in 24 clock and are in UT (the same as GMT) so you will need to correct for time zones and daylight time savings changes. I have included the approximate moonrise and moonset times from Oxfordshire, UK and a note about when the X and V are visible from the UK.

There are seven occasions during 2020 when the X and V are visible from the UK, but unfortunately only two of those occasions coincide with a night time Moon, the first being on 2nd January from 20:00 UT. The second occasion is on 22nd November when they first become visible during daylight, but by 17:00 UT it should be dark enough to make it easier to spot them.  However, if you have good binoculars or a telescope you will still able to observe the X and V on a daytime Moon, so please do try to find them on those dates too. 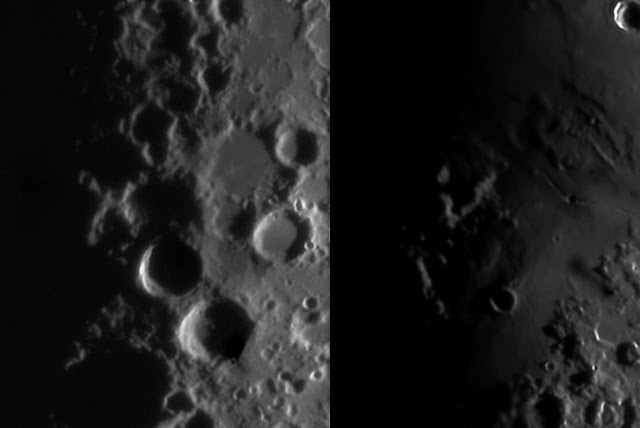