On Monday 11th November 2019, we have the opportunity to observe a rare event; Mercury transiting the disc of the Sun. The last time we saw this from the UK was on 9th May 2016, but the next transit will not take place until 2032.

A transit occurs when a planet whose orbit is closer to the Sun than Earth, passes between the Earth and Sun, and the planet can be seen as a small black disc crossing the Sun’s surface. As viewed from Earth, the only planets that transit the Sun are Mercury and Venus. Because the orbits of these planets are slightly tilted, they do not cross the Sun’s disc every time they orbit. Approximately 13 times per century Mercury transits occur, but Venus transits are rarer. The last Venus transit took place in 2012, but the next one isn’t until 2117. The reason Mercury transits are more common is because Mercury is closer to the Sun and orbits more rapidly than Venus. Mercury only takes 88 Earth days to orbit the Sun whereas Venus takes 225 days to complete one orbit.  That said, a Mercury transit is still a pretty rare event.

How to observe the transit:
On 11th November 2019, Mercury starts to move across the disc of the Sun around 12:30 pm (GMT) and continues throughout the afternoon, leaving the disc after sunset. 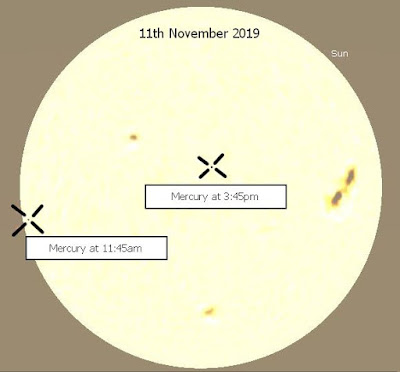 Graphic showing Mercury’s position at 11:45am and 3:45pm on 11th November
Created by Mary McIntyre using Stellarium.
Note: we are unlikely to see this many sunspots on Monday!

SAFETY NOTICE: NEVER EVER ATTEMPT TO LOOK AT THE SUN EITHER DIRECTLY, OR THROUGH BINOCULARS OR A TELESCOPE WITHOUT THE CORRECT EQUIPMENT. YOU WILL GO BLIND! DO NOT UNDER ANY CIRCUMSTANCES TRY TO USE ECLIPSE GLASSES WITH BINOCULARS OR A TELESCOPE; THE MAGNIFICATION OF THE SUN WILL BURN STRAIGHT THROUGH THE GLASSES AND CAUSE PERMANENT DAMAGE TO YOUR EYES. IF YOU ARE USING A TELESCOPE, MAKE SURE YOU KEEP THE CAPS ON THE FINDERSCOPE. EVEN THAT LOW MAGNIFICATION IS ENOUGH TO BURN YOUR EYES AND CAUSE PERMANENT DAMAGE.


If your telescope has a lens cap that has a smaller removable cap, you can make a filter that sits inside the larger cap, making sure the smaller aperture cap is completely covered with solar film. It’s important to check that no light is getting through around the edges and that there is no damage anywhere on the filter.
Alternatively, you can buy glass solar filters, like the one in the image below made my Thousand Oaks. Whichever filter type you use, make sure it is well-secured with no risk of the filter blowing or falling off. 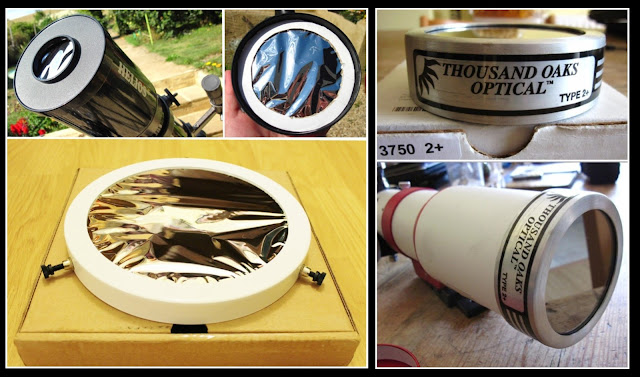 A selection of solar filters

If you have a suitable filter in place, you can observe the Sun directly through the eye piece. Because Mercury is so small (it will be a tiny dot!), you will need a magnification of about around 50x or more. Because Mercury is so small, you will not be able to observe the transit using eclipse glasses or small binoculars with solar filters. To give you an idea of the apparent size of Mercury against the solar disc, see the image below taken during the 2016 transit. 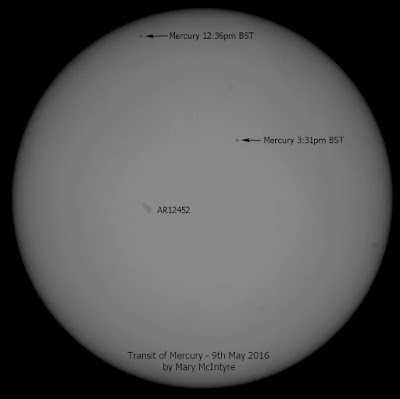 Using a DSLR and Zoom Lens:
If you have a DSLR camera and a 300mm (or greater) zoom lens, you can make a solar filter to sit on the front of the camera to photograph the transit. If you do this, make sure you use the live view screen to achieve focus; never look through the view finder! You will find it easier if you cover the back of the camera and your head with a black blanket to keep out residual light while you try to get the camera focused. Below is the set up I used for the total solar eclipse in the USA back in 2017. 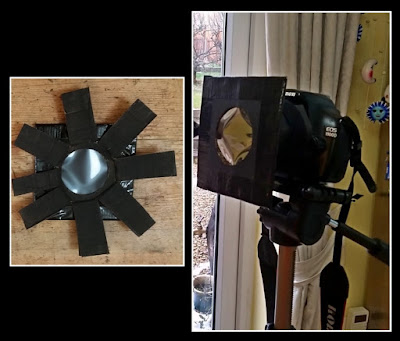 Telescope Projection Method:
If you do not have time to make or buy a solar filter, you can use a projection method. But do not attempt this method unless you know what you’re doing. Do not attempt this method if you have a large aperture reflecting telescope because the parts may get too hot. Also make sure that all of your eye pieces and eye piece holders are not made of plastic, because they will melt in the heat of the Sun.
First of all, you need a piece of white card, or white paper glued onto a piece or card, or a piece of white board. This will be your projection board. If you can, try to find a way of mounting it onto a tripod or broom handle so it is free standing. It will help you greatly later on if it can stand up by itself.

Begin by lining up your telescope with the Sun.  Place your projection board behind the eye piece and use the finderscope to help you get things lined up properly. If you are using a refractor, your projection board will be behind the telescope, but if you are using a reflector (as shown in the image below) it will be at the side. When everything is in place, you will see a large bright disc on your projection board. Adjust the focus on your telescope until the disc is nice and sharp. You should easily be able to see any sunspots which are currently visible. Once you have aligned the telescope, immediately put the caps back onto the finderscope because even that small amount of magnification can cause permanent eye damage if you accidentally look through it. During the transit, you will see Mercury as a tiny black dot slowly passing across the projected Sun’s disc. If your telescope does not track, make sure you constantly make adjustments to keep the Sun in shot, otherwise in the internal components of your telescope may be damaged. If you want to take a photograph of the projection on the white board, it is safe to do so, but do not try to take a photograph by holding your camera up to the eye piece - it will burn your camera sensor! Never leave a solar projecting telescope unattended in case somebody who doesn’t understand the danger tries to look through the eyepiece. 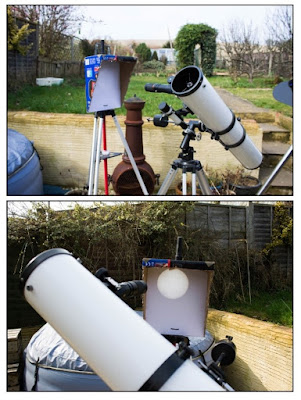 Using a 4.5” reflector to project the Sun

At the time of writing (4th November) the weather forecast is not looking good for my location in North Oxfordshire. But let’s hope that we get at least some brief cloud gaps and get a chance to witness this rare event. Wherever you observe this event, good luck and happy observing!