Astronomers are obsessed with distances. Whether it be the distance to the Sun, our nearest star or nearest galaxy, we always want to know how far away things are. But you may have noticed that there are several units of distance used at different times; this is usually related to how far away the object in question is. And if some of these distances don’t make your head hurt, then they should!

Astronomical Units (AU) – when you read about things within our own Solar System, you will usually see distances described in AU. So how far is 1 AU? An astronomical unit is defined as the average distance between the Sun and Earth. This equates to approximately 149.6 million km (usually rounded up to 150 million km) which is about 93 million miles. So already the numbers are quite big; it is much easier to talk about the orbits of our neighbouring planets in terms of AUs rather than kilometres.

Light Years (ly) – when we talk about things outside our Solar System, such as distances to other stars or galaxies, you often see light years used as a unit of distance.  Our nearest star is 4.2 light years away. So how far away is 1 light year? It refers to the distance that a photon of light travels in a 1 year period. The speed of light is 300,000km per second, or 1,080 million km per hour (about 670 million miles per hour) so 1 light year equates to a distance of 9,460,000,000,000 km – so a unit of 1 light year is far easier to handle! Just for comparison, the speed of light is 173AU per day, so 1 light year equates to over 63,000AU. Technically our nearest galaxy is one of the Milky Way’s satellite dwarf galaxies, called the Canis Major Dwarf. This is 25,000 light years away. However, our nearest spiral galaxy is the Andromeda Galaxy, which is a whopping 2.5 million light year away. (Do you want your brain to hurt even more?) That equates to 23,700,000,000,000,000,000 km! And that is our nearest galactic neighbour. Imagine the numbers when you start talking about the most distant galaxies we’ve discovered (prepare for your brain to start really aching now!) At the end of last year, astronomers reported the discovery of the most distant galaxy ever observed. The galaxy, called “z8_GND_5296”, is 13.1 billion light years away (I won’t write that down in kilometres because it will be a sea of zeros!). So you can see why astronomers use don’t use kilometres when measuring such vast distances. However, light years are generally only used when an article or report is being pitched to members of the public. Professional astronomers prefer to speak about distances in parsecs.

Parsec (Pc) – The important thing to know about a parsec is that it equates to about 3.26 light years, or just over 206,000AU (I’ll explain in a minute why it’s not a nice round number relating to either of those units). The kind of distances involved in astronomy means that you are often talking about things in terms of Kpc (1 thousand pc), Mpc (1 million pc) or Gpc (1 billion pc). 1 parsec is defined as “the distance from the Sun to a hypothetical astronomical object which has a parallax angle of 1 arcsecond”. So what on earth does that mean? First of all parallax; close one eye then hold a pencil out in front of you at arm’s length. Then keeping your arm still, change which eye you are looking through. It will appear as though the pencil has moved. The same is true if you apply this to the apparent position of the stars relative to the position of Earth during its orbit around the Sun. Astronomers can measure how far away an object is by measuring how far it appears to have moved as Earth moves around the Sun. We know that the distance between the Sun and Earth is 1AU, so you can use some simple trigonometry to calculate how far away an object is. So back to our parsec. The celestial sphere is divided into smaller chunks in the same way that Earth’s latitude and longitude are. It is divided into degrees (360 in total), arcminutes, and arcseconds. So think back to that definition: “the distance from the Sun to a hypothetical astronomical object which has a parallax angle of 1 arcsecond” – parsec is just an abbreviation of parallax and arcsecond.  The little diagram below should help you to picture this better. There are no actual objects located at 1 parsec, this is just the definition of how that unit is calculated. The further away the object is, the less it will appear to move and so the smaller the parallax angle will be. And vice versa. Our nearest star, Proxima Centauri is just over 1.3 parsecs away, whereas Galaxy z8_GND_5296 is just under 1Gpc away. Calculating distances in parsecs is much simpler than trying to use accurate speed of light calculations and it is a much more useful unit of measure for very distant objects; those distances which truly are astronomical! 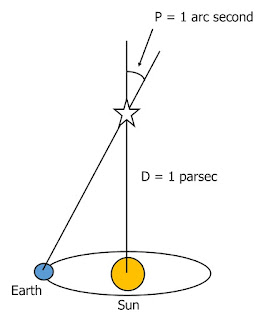