Reading about the positions of the planets each month, there are some words which crop up which can throw people into confusion. At times it can be like reading another language! So here is a brief summary of the commonly used terms and what they mean. The diagram will help you to better understand these descriptions!

Orbits
In our solar system, the planets orbit the Sun and each planet has moons which are in orbit around them. For simplicity, the orbits are often depicted as being circular, but in fact most of them are actually oval shaped, or elliptical. With the planets, the further away from the Sun you go, the more elliptical the orbit is. This means that there are times when the orbiting body is closer to its parent and times when it is further away. There are 2 terms used to describe this. Perihelion is the point where the orbiting body is closest to its parent, and aphelion is its furthest point. Our Moon also has an elliptical orbit, but the Moon has its own special words to describe its nearest and furthest points in its orbit. Perigee is when the Moon is at perihelion, and Apogee is when it is at aphelion. Planets which are orbiting closer to the Sun than Earth, i.e., Mercury and Venus, are called inferior planets; those which orbit further away from the Sun than Earth are called superior planets.

Prograde and Retrograde Motion
If you study the planets from Earth over a number of nights, they appear to move roughly along an invisible line called the ecliptic. Most of the time they appear to move from east to west over a number of nights, and this “forward” movement is called prograde motion. However, there are times when a planet appears to slow down, stop, and then move backwards over a number of nights. This apparent “backwards” movement is called retrograde motion. The planets aren’t really moving backwards, they just appear to be from here on Earth. It only happens with the superior planets. Because Earth is closer to the Sun its orbit is smaller, so sometimes it will align with the superior planet (the point where it appears to stay still) then overtake it on the inside (the point where the superior planet is in retrograde motion). After a while the planets realign themselves and the movement once again become prograde.

Opposition and Conjunction (Superior Planets)
Opposition refers to the point in a superior planet’s orbit where it is on the opposite side of the Earth to the Sun, forming a straight line between the three bodies. When a planet is at opposition it is receiving the maximum amount illumination from the Sun, therefore is usually the best time for observation.
Conjunction is when 2 objects appear close to each other when viewed from Earth. This holds true when referring to planetary orbits. When viewed from Earth, a planet at conjunction is in the same part of the sky as the Sun. In order for this to occur, the planet needs to be on the opposite side of the Sun to the Earth. When a superior planet is at conjunction it is usually unfavourable for observation because it will appear close to the sun. 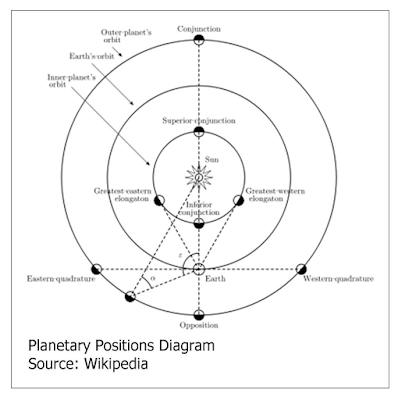 A note about magnitudes
The magnitudes of stars can appear to be confusing at first. It is a scale which was first devised by ancient astronomers about 2000 years ago and it refers to how bright a star appears to be as viewed from Earth. Contrary to what you might expect, the brighter the star, the lower the magnitude number will be and the dimmer the star, the higher its magnitude number will be. This is because those early astronomers categorised stars by their relative apparent brightness; “1st class” stars being 1st magnitude, going down to the faintest stars which were “6th class”, or 6th magnitude. Originally they stopped at 6 because that is the limit of what the human eye can see as viewed from a dark sky site. In the present day, stars are still classified using this old terminology. It is a logarithmic scale and a difference of 1 order of magnitude is 2.5 times difference in apparent brightness. So a magnitude 1 star is 2.5 times brighter than a magnitude 2 star, for example. The bright summer star, Vega, was used as a starting point when this scale was devised, having a magnitude of 0. Anything brighter than Vega has a negative magnitude number, for example, Sirius the Dog Star has a magnitude of -1.5.

When looking at planetary data, it is common to see Venus and Jupiter having negative magnitudes because they are usually brighter than the brightest stars. Iridium flares and the International Space Station are regularly mag -3 or brighter. Just for comparison, Polaris the Pole Star, has a magnitude of 2, whereas the Full Moon has a magnitude of -13, and the Sun has a whopping value of -27!

It can take a while for these definitions to sink in, but hopefully this will make the monthly planetary data easier to understand.